Here is a list of cars that support wheelchairs.

Special thanks to wikipedia since they own the images and articles on the cars. Let's start.

Largely marketed in the United States and Canada, the Dodge Caravan was marketed in Europe as the Chrysler Voyager. From 2009 to 2014, Volkswagen marketed the Volkswagen Routan, a rebadged version of the Dodge Grand Caravan.

Since its November 1983 introduction for the 1984 model year, the Dodge Caravan has been assembled at Windsor Assembly, in Windsor, Ontario, Canada; prior to 2010, Saint Louis Assembly (in Fenton, Missouri) was an additional source of production. Since their introduction in late 1983, over 14.6 million Chrysler minivans (including rebadged variants and export versions) have been sold worldwide.[2] 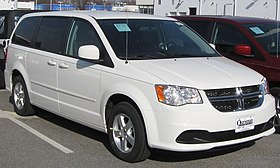 For the North American market, the Honda Odyssey is a minivan manufactured and marketed by Japanese automaker Honda since 1994, now in its fifth generation.

The Odyssey had originally been conceived and engineered in Japan, in the wake of the country's economic crisis of the 1990s – which in turn imposed severe constraints on the vehicle's size and overall concept, dictating the minivan's manufacture in an existing facility with minimal modification.[1] The result was a smaller minivan, in the compact MPV class, that was well received in the Japanese domestic market[1] and less well received in North America.[2] The first generation Odyssey was marketed in Europe as the Honda Shuttle.

Subsequent generations diverged to reflect market variations, and Honda built a plant in Lincoln, Alabama, United States, incorporating the ability to manufacture larger models.[2] Since model year 1999, Honda has marketed a larger (large MPV-class) Odyssey in North America and a smaller Odyssey in Japan and other markets. Honda also offered the larger North American Odyssey in Japan as the Honda LaGreat beginning in June 1999 through 2005. Both versions of the Odyssey were sold in Japan at Honda Clio dealership locations. Both versions of the Odyssey are currently sold in the Middle East.[3] 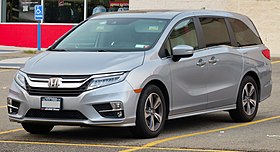 The Toyota Sienna (Japanese: トヨタ・シエナ Toyota Shiena) is a minivan manufactured by Toyota at the Toyota Motor Manufacturing Indiana facility in Princeton, Indiana, United States, for the North American market. It is named for the Italian city of Siena, in the region of Tuscany. It replaced the first generation Previa van in 1997 with a more conventional front-wheel drive layout and shares a heavily revised platform with the Camry.[1] Both the Previa and original Sienna were smaller than the other minivans they competed against, but a redesign in 2003 (for the 2004 model year) increased the dimensions to match those of its competitors.[2] The Sienna is currently the only minivan in its class to offer all-wheel drive.[3] It was redesigned a second time in 2010 (for the 2011 model year). The third generation Sienna went on sale in the United States in February 2010 and is the first Sienna to ever receive a "Top Safety Pick" award from the Insurance Institute for Highway Safety. Exports from the United States to South Korea began in November 2011. 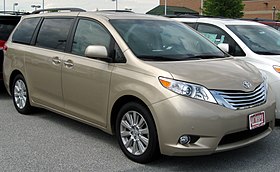 The Honda Pilot is a mid-size crossover SUV manufactured by Honda and introduced in 2002.[1]

Primarily aimed at the North American market, the Pilot is the largest SUV from Honda and features three-row seating. Pilots are currently manufactured in Lincoln, Alabama, and the Pilot was produced in Alliston, Ontario until April 2007. The first generation Pilot was released in April 2002 as a 2003 model.[2]

The Pilot shares its platform with the Acura MDX, as well as the Odyssey minivan and the Accord sedan. The Pilot's unibody construction and independent suspension are designed to provide handling similar to that of a car, and it has integrated perimeter frame rails to allow towing and light off-road use.

Prior to the introduction of the Pilot, Honda marketed the compact crossover CR-V, and the Honda Passport, (a rebadged Isuzu Rodeo) that was a pickup truck-based design. The Pilot is Honda's largest SUV, although the 2010 Crosstour surpassed the Pilot in length.[3] 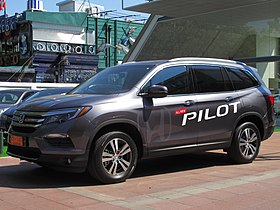 The Chrysler Pacifica is a minivan being produced by the Chrysler division of FCA US LLC. Despite sharing its name with a discontinued crossover, it is an all-new design replacing the Chrysler Town & Country. 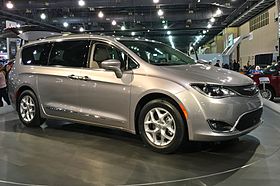